For many years, Aylesbury had an excellent reputation as a “music town”, with a wide variety of live music across different genres. The main venues were the Grosvenor Ballroom / Borough Assembly Hall, the Granada Theatre, the Town Hall, Walton Hall and Aylesbury Social Club – and also pubs, such as the Derby Arms.

This site is part of a wider movement to recognise Aylesbury as a music town, both in the past and going forward. By drawing attention to Aylesbury’s amazing musical past, we hope that this will encourage more music events in the town in the future.

Please use the search box to find what you are interested in, or follow the links below.

We would love to hear your memories of music in Aylesbury. Please contact us through the form below, or email admin@aylesburymusictown.co.uk.

Chris Shields wrote and kindly provided this photo taken on 19 May 1962 when Colin Hicks (Tommy Steele’s brother) and Cliff Adams and the Twilights played at the Grosvenor. 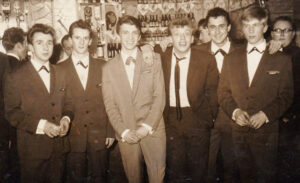 Cliff Adams and The Twilights were back at the Grosvenor on 21 July, with The Twilights also backing Paul Raven (later Gary Glitter).

David Stopps has recently acquired the contract between promoter Eddie Friday and The Move for their appearance in Aylesbury on 6 December 1968. See more about 1968 here. 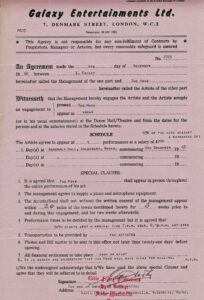 We would like to add details of local bands and artists from this era, and also details of what was going on in smaller venues, such as pubs. We would also love to talk to people about their memories of the gigs in Aylesbury and any memorabilia they might have, or if they played in a band during this period. If you can help, please do get in touch via the email address above.

The Granada Theatre in the High Street presented stage shows between 1958 and 1964. These were “pop package” shows which toured around the country, with two shows a night and many artists on the bill. Artists appearing included the Rolling Stones, Gene Vincent, Cliff Richard, Tommy Steele, Billy Fury and Adam Faith.

From 1959 to the mid 1960s, the Aylesbury Jazz Club (run by Nanda and Ron Lesley) promoted trad jazz. All of the major artists in the world of trad jazz appeared in Aylesbury, including Ken Colyer, Chris Barber, Kenny Ball, Acker Bilk and Humphrey Lyttelton. Between 1959 and 1961 there were a number of “all-nite jazz balls” at the Grosvenor. In 1964, as the popularity of trad jazz declined, Nanda and Ron changed to Aylesbury Bluesville with bands such as The Animals, The Yardbirds, Manfred Mann and Georgie Fame and the Blue Flames, as well as visiting artists including John Lee Hooker, Little Walter and Inez and Charlie Foxx.

Rock music first appeared at the Grosvenor Ballroom in 1960. Eddie Friday promoted gigs on Saturday nights throughout the period until 1968; other promoters included Stanley Wyatt, Paul Haywood, Cyril Meichtry and Adrian Hopkins. From October 1963, the ownership of the hall was taken over by the council and the name was changed from the Grosvenor to the Borough Assembly Hall. Artists appearing included Johnny Kidd and the Pirates, The Barron Knights, The Hollies, The Who, The Small Faces, Cream and Jimi Hendrix.

Saturday nights at the Aylesbury Social Club begain in 1968. To start with there were live bands playing soul and reggae each week until early 1970, when DJs took over most weeks, with occasional appearances by artists such as Johnny Johnson and the Bandwagon, Desmond Dekker, The Maytals and Jimmy Ruffin. At the time there was a broad split between those who went to the “Social” (mods and skinheads who dressed immaculately) and the Friars crowd (hippies and alternative culture).

Local pubs, such as the Derby Arms, were venues for folk, blues and jazz.

Note: This site does not specifically cover classical music in Aylesbury. This deserves to be covered as a separate project. There was an active Aylesbury Music Club that promoted classical music in the town. Today the Aylesbury Choral Society and Aylesbury Symphony Orchestra, founded by Charles Pope, continue to thrive.

Aylesbury born composer Rutland Boughton (1878-1960) retained links with the town throughout his life, and wrote a piece entitled “Aylesbury Games”.