1961 saw the Aylesbury Jazz Club continue to thrive on Tuesday evenings – but there were some changes.

Toward the end of the year it was announced that the jazz club was changing venue, from the Grosvenor Ballroom to the Town Hall.

One artist of note to appear during the year was the Temperance Seven. The Bucks Herald reported that “hundreds of traditional jazz fans had to be turned away when the Temperance Seven made their debut at the Aylesbury Jazz Club. At one period the queue stretched for over 200 yards.”

The Temperance Seven’s single You’re Driving Me Crazy, produced by George Martin, was at number two in the charts, and went to number one the following week. 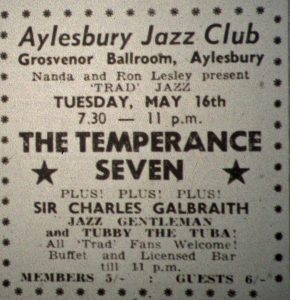 On November 3rd, in the Bucks Advertiser Tony White reported “Jazz Club To Quit The Grosvenor”:

After using the Grosvenor Ballroom, Aylesbury, as it’s headquarters for nearly three years, Aylesbury Jazz Club is quitting this venue and moving down the road, under the arches to the Town Hall. The move will take place on Tuesday, November 14, and first man in will be the “Guv’nor”, Ken Colyer.

Why the move after so long? Let the club’s host, Ron Lesley, explain. “A better hall, and better facilities for my members”.

The one big question is, of course, that of capacity crowds. In the past, when Barber, Bilk or Ball have been to the Grosvenor, the number of fans has been in excess of that which will be allowed at the Town Hall. The Town Hall has a maximum of 660, but Ron is not particularly worried. “My average weekly crowd is about 350, but Chris Barber is the next big name to come to Aylesbury. He has been contacted and says he does not mind the 660 ceiling”, says Ron. 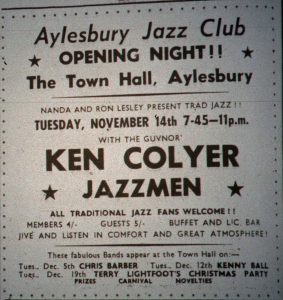 But before this there had been a dispute earlier in the year, when a fire exit check on a jazz club evening resulted in a court heating. The Bucks Advertiser reported:

The lease-holder of Aylesbury’s Grosvenor Ballroom, Edward J. Friday, was fined £10 and ordered to pay £1 costs at Aylesbury court after being found guilty of failing to keep unobstructed exits, passageways and gangways in the ballroom.

The court was told of a visit by Aylesbury Borough Council’s senior building inspector, a police inspector and a fire officer to the Grosvenor during a jazz club session on Tuesday, July 25.

The building inspector, Mr. Geoffrey Edwards, said he was told that 551 people had paid for admission when he arrived. He inspected the premises and found all bar one of the exits were either chained and padlocked or obstructed by boards, or as in one case by a piano, blocking the passage leading to the doors.

In answer to cross-examination, defending, Mr. Edwards said Mr. Friday was not at the Grosvenor that night. The promotoer of the Aylesbury Jazz Club, Mr. Ronald Lesley, told the court he had a verbal agreement with Mr. Friday to hire the Grosvenor every Tuesday at a rental of £15. He was given to understand that Mr. Friday was responsible for the state of the hall …

Friday denied in the witness box that he was responsible for the hall’s condition on jazz club nights. He claimed that on one occasion he wrote to Mr. Lesley and reminded him of his responsibilities with regard to keeping all the fire exits open when the ballroom was being used.

After the magistrates had retired the Chairman, Col. F. W. Watson, said the Bench felt that Friday was responsible for seeing the exits were kept free.”

This episode may have soured the relationship between Eddie Friday and Ron Lesley. It is interesting that when the Town Hall was closed in 1962 due to a fire, the Aylesbury Jazz Club did not return to the Grosvenor – but instead moved to the Aylesbury Social Club in Park Street, only returning when the Grosvenor re-opened as the council owned Borough Assembly Hall in October 1963.

Details of the Aylesbury Jazz Club on Tuesday evenings in 1961 are shown below. There was also one all night jazz ball on 10th March – for details please see here.