With the decline in the popularity of trad jazz, Nanda and Ron Lesley made the decision to shut down the Aylesbury Jazz Club and to move toward rhythm and blues. Aylesbury Bluesville bought a different range of artists to Aylesbury – British artists such as The Animals, The Yardbirds, Manfred Mann, Georgie Fame and Long John Baldry, and American artists including John Lee Hooker, Little Walter, Charlie and Inez Foxx and Jimmy Reed.

The year started with trad jazz artists who had been regulars at the Aylesbury Jazz Club – Terry Lightfoot, Chris Barber, Acker Bilk, Ken Colyer and Kenny Ball. Acker Bilk was still pulling in the crowds.

Long John Baldry and the Hoochie Coochie Men, with Rod Stewart, would become regulars in Aylesbury – and were back a few weeks later for the opening night of Aylesbury Bluesville. 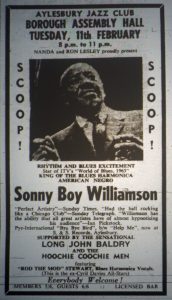 Sonny Boy Williamson sang, played and swung his way into the hearts of a capacity crowd at the B.A.H. on Tuesday night. This tall, ageing, stooping negro blues man came, the audience saw, and he conquered.

The final night of the Aylesbury Jazz Club was on 17th March with the Dutch Swing College Jazzband. Tony White wrote in the Bucks Advertiser:

Traditional jazz left the Borough Assembly Hall on a wave of applause on Tuesday. The final session, before the Rhythm and Blues men take over, was wildly successful, with the Dutch Swing College band in tremendous form.

Like many other jazz clubs in this country, Aylesbury has found it necessary to go over to rhythm and blues because of the rapid drop in audience numbers.

The following week, 24th March, was opening night for Aylesbury Bluesville with Long John Baldry and his Hoochie Coochie Men, with Rod Stewart.

The Animals played four times during the year, with Eric Burdon and Alan Price in the group. The first appearance was on 21st April. By the time of their visit on 20th June, the group were at number one with The House Of The Rising Sun.

The Bucks Advertiser reported that The Cheynes also appeared – see below. The other appearances by The Animals were on 18th August and 24th November. 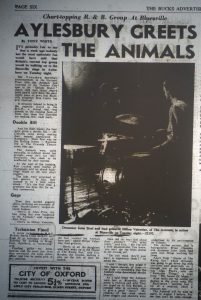 On 16th June, John Lee Hooker was in Aylesbury, supported by John Mayall’s Bluesbreakers (who had appeared as headliners a few weeks earlier). 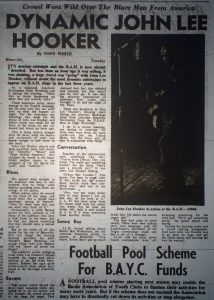 In October, Bluesville presented a number of shows under the banner of the American Negro Blues Festival. On 13th October 1964, Charlie and Inez Foxx appeared. Tony White writing in the Bucks Advertiser was impressed – both by Charlie and Inez, and also by the Spencer Davis Group who were the backing band.

No-one can doubt that at Bluesville on Tuesday the young American brother and sister team of Inez and Charlie Foxx scored a triumph. Their 45-minute show, ably backed by the Spencer Davis Group, was a tour-de-force that had the fans shouting for more …

A special word is in order for the Spencer Davis Group. This quartet from Birmingham is undoubtedly one of the most polishred, exciting rhythm and blues bands to appear in Aylesbury. They played the first half on their own … Particularly impressive was drummer Pete York, and lead guitar and vocalist, Steve Winwood … The group only turned professional in May this year and it’s obvious they have a big future. They play with taste and intelligence.

The Spencer Davis Group were back in Aylesbury at the Granada supporting Manfred Mann in November, and headlining at Bluesville in December, with further appearances in January and February 1965. 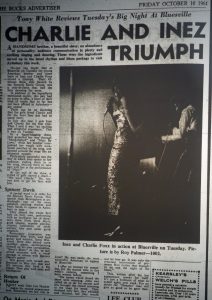 On 15th December Rufus Thomas appeared, backed by the Tony Knight Chessmen, including Lol Coxhill. Lol made his first TV appearance in 1964 on “Ready Steady Go”, playing with the Chessmen backing Rufus Thomas on his hit “Walking The Dog”. 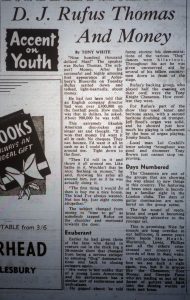