1968 proved to be a difficult year for music promoters in Aylesbury.

Eddie Friday pulled the plug on Saturday nights at the Borough Assembly Hall in June. Eddie’s problems were outlined in the Bucks Herald:

Eddie told us this week of his tremendous loss in takings over the past 18 months. “Lack of patronage over the past 18 months has been diabolical,” he said. Another of his main headaches, he said, is the B.A.H. itself. The decor is all wrong, it just doesn’t compare with other dance halls like Top Rank at Watford, and it lacks atmosphere.

The list of artists continued to be rather strange – including Margitte Bardot (the little kmown younger sister of Bridgette Bardot), The Rock ‘n Roll Revival Showband and The Merseys – a “big name” group which attracted only 139 people and lost Eddie £127. Eddie Friday put on two more shows. On July 19th The Foundations, in conjunction with Aylesbury Borough Council, which also made a loss, and in December The Move. 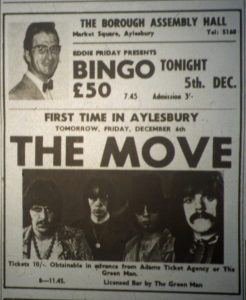 At the beginning of the year, Andrew Smythe as the Ready Steady Go Club, put on The Foundations and The Love Affair. According to the ads for The Love Affair, he also planned to put on The Plastic Penny on March 2nd, but this did not happen. 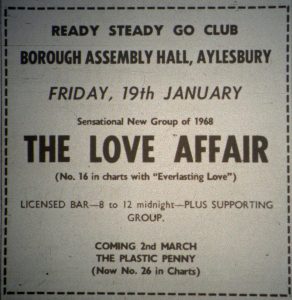 On 29 February, the front page story of The Bucks Herald was “Wanted “pop” – got Town Clerk – Group failed to appear”:

About 150 young people paid 10s. to see top pop group The Foundations at Aylesbury’s Borough Assembly Hall on Friday. Instead they saw the Town Clerk, Mr. R. D. W. Maxwell who was called from his Aylesbury home to placate the youngsters who were furios at having paid for a group which did not appear.

The promoter was a Mr. Raine from London, who had booked the hall through his company North West Productions. On 7 March, the Bucks Herald ran an editorial entitled “Pop Fans Need A Guarantee” which began:

It is time Aylesbury Borough Council’s Parks and Public Buildings Committee, and possibly the council as a whole, took a closer look at the terms and conditions under which the Borough Assembly Hall, owned by the council, is let. Without referring to any specific incident, there have been a number of occasions when a large number of young people have been badly let down, inasmuch as they have paid a not insignificant sum to hear big-name groups who have failed to appear.

On March 28, the Bucks Advertiser reported on it’s front page under the title “Moves To Protect Pop Fans” that action had been taken:

How to protect pop fans – that was the subject debated at length by Aylesbury Borough Council’s Parks and Public Buildings Committee on Friday. The committee came up with a list of new provisions which, it is hoped, will ensure that fans get fair play when they pay to see pop shows at the Borough Assembly Hall.

In May and June, Cyril Meichtry – who sometimes billed himself as Cyril of The Green Man – put on three gigs on Friday evenings at the Brough Assembly Hall – The Marmalade, The Herd and The Tremeloes.

In an interview with the Bucks Advertiser on May 16, Cyril said: “Somebody had to do something, because the teenagers were not getting the entertainment they wanted”. The Advertiser commented: “And so for this reason, and the fact that much of his trade depended on the number of spectators at the shows, Mr. Meichtry decided to venture into the pop show business.”

The Herd played to a full house – the Bucks Advertiser reported that “for the first time in ages a group played to capacity crowds in the hall” – but The Tremeloes were less of a draw and played to a half-empty hall, with a loss of more than £200 for the promoter. 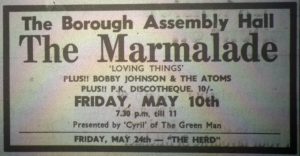 After Eddie Friday had confirmed that he had cancelled his block booking of Saturday nights at the Borough Assembly Hall, the council invited tenders to take over these dates. At the end of October, it was announced that Adrian Hopkins from Oxford had been chosen from six tenders that had been received. Adrian Hopkins also promoted dances at Oxford Town Hall and the Bridge Hotel, Wheatley, and ran a booking agency.

The first date was on November 30 with Chris Farlowe and the Thunderbirds. In the following weeks, The Herd, Simon Dupree and the Big Sound and the Sonny Burke Soul Show appeared – but these were not a success. The Bucks Herald reported that:

His first promotion, when Chris Farlowe appeared, drew an audience of a little over 300. The second, with The Herd as the main attraction, attracted 230. The third promotion, Simon Dupree and the Big Sound, brought in 203, the Sonny Burke Soul Show, plus the Emotional Feet, attracted 80.

On January 9, 1969, the Bucks Advertiser reported that:

After presenting only four shows as the Borough Assembly Hall’s Saturday night pop promoter, Adrian Hopkins has asked Aylesbury Borough Council to release him from his contract.

Mr. Hopkins successfully tendered £30 for each Saturday night booking when the council was seeking a successor to former Saturday night promoter Mr. Eddie Friday. But Mr. Hopkins soon experienced the “apathy” that caused Mr. Friday to back out of his Saturday night block booking. He claims he made a £730 loss on the four promotions. 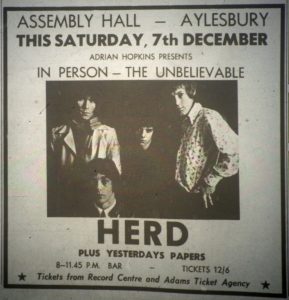 See below for list of gigs at the Borough Assembly Hall.

Another venue presenting live music was the John F. Kennedy in Bicester Road, where Curly Fields was the promoter. During the year Curly presented Humphrey Lyttelton and his band in May, and The Karl Denver Trio at August bank holiday. There may have been more – the ad for Humphrey Lyttelton shows: “Forthcoming Thursday attractions may include: Acker Bilk, Kenny Ball, Chris Barber”. Any more details about gigs at the John Kennedy would be welcome.

By the end of the year, Curly had decided to move on. Writing in the Bucks Herald, Dave James wrote:

Curly has given us professional entertainment from time to time and was to have entered into the world of cabaret for the first time in Aylesbury with the appearance of Diana Dors. But Curly has decided to move on where there is more demand for his efforts – at Paignton, Devon. 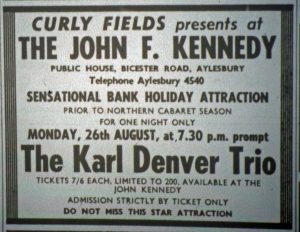 Folk, blues and jazz found a home at the Derby Arms.

In February, Willie Barrett and Mike Batory formed the Thumbstrumb folk club, firstly at the Bricklayer’s Arms in Walton before moving to the Derby Arms.

Also at the Derby Arms, Ron Watts and Bob Savage presented blues. Ron Watts was running The Blues Loft at the Nag’s Head in High Wycombe, and was looking to do something similar in Aylesbury. The Bucks Herald reported:

The quiet of St. Mary’s Square, Aylesbury, which comprises the parish church surrounded by some fine houses, has recently been shattered on Monday evenings by some beautiful sounds emanating from the Derby Arms which is also in the square …

After a rather inauspicious start with a group called the Levee Camp Moan, the club is rapidly gaining strength. The Steve Miller Delivery, a very good jazz-influenced band, which normally has Lol Coxhill, of Aylesbury, as a member, played an excellent evening there, and other bands are to follow. Some of the bands, including the Smokey Rice Blues Band, from Princes Risborough, are to be featured on an E.P. produced by Ron Watts. 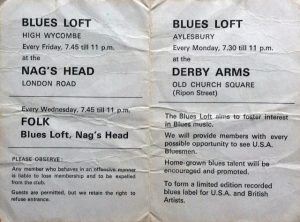 The year also saw the start of Saturday evenings at the Aylesbury Social Club, with bands such as Harlem John’s Reshuffle. Earlier in the year the Social Club was the venue for a number of appearances by local band, Concrete Parachute. 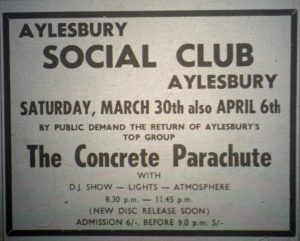 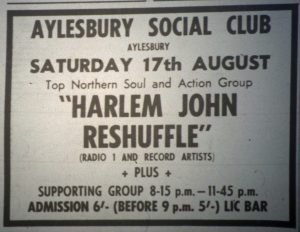