1964 was the last year of the stage shows at the Granada. There were only three – but included probably the most famous of them all, when the Rolling Stones came to town on 21st January. 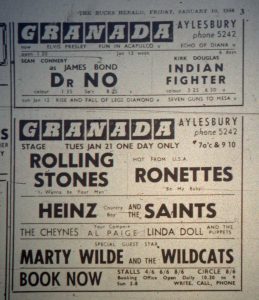 The show was famous because the Stones performed as a four piece that night – Brian Jones got lost in the fog, and didn’t arrive. There are different versions of whether he was stuck in Reading – or was much closer.

The Bucks Advertiser reported that Brian Jones was stuck in Reading – but the following account appears in Bill Wyman’s book “Stone Alone”, suggesting he was seen “on the outskirts of Aylesbury”:

On 21 January we had a gig in Aylesbury and we planned to meet first in town. Brian left in his car and drove to Cheltenham to see his parents, after we had done a picture session and interview …

“Our speed dropped to 15 m.p.h. and we crept along, following the cat’s eyes … Our one-hour trip by now had taken three hours and we were on the outskirts of Aylesbury when Mick shouted as Brian’s car loomed out of the fog and began to pass us. Brian was obviously lost and heading in the opposite direction. We all yelled out of the windows, but were unheard and he disappeared into the fog. Brian never reappeared from that foggy sighting but we arrived at Aylesbury and played two concerts without him.

The Bucks Advertiser included a photo on its front page and several reports inside the paper – click image to enlarge: 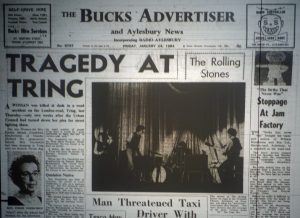 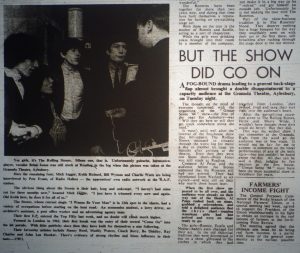 Also appearing were The Ronettes, who were also held up by the fog and went on stage for the first show without changing.

The Ronettes – Be My Baby

Also on the bill were Heinz and the Saints and Marty Wilde and the Wildcats.

The two other shows were in November 1964. On 3rd November, the Hollies were top of the bill. 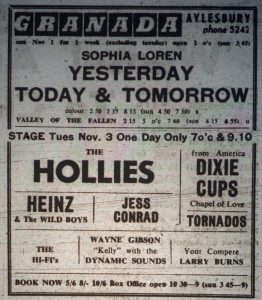 Also appearing were the Dixie Cups, who had a hit with Chapel Of Love, Heinz (now with The Wild Boys), Jess Conrad and the Tornados. 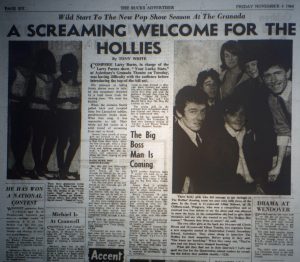 The final show of the year – and the last at the Granada Aylesbury – on 19th November starred Manfred Mann, with the Soul Sisters, the Spencer Davis Group and Bern Elliott and his Klan. 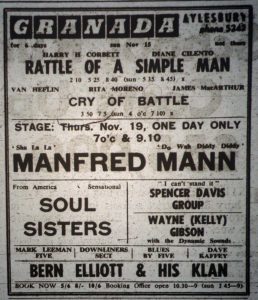 The Bucks Advertiser noted that this was Manfred Mann’s third visit to Aylesbury – the other two had been in April and July at the Borough Assembly Hall. Manfred Mann is quoted as saying: “We like coming to Aylesbury. We feel we know the people now, and anyway we like the Ducks.” 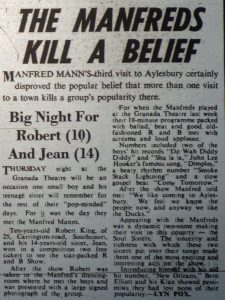 In his column in the Bucks Advertiser, Tony White reported that falling attendances at package tours across the country were causing concern with the promoters who were losing money. For the Granada Aylesbury, the Manfred Mann show was the end of the road. 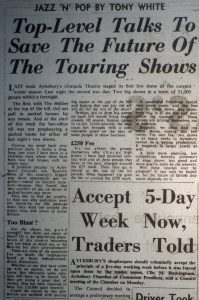