1962 saw rock shows at three different venues. Eddie Friday continued with his Saturday evenings at the Grosvenor, Wallis & Wyatt (Alan Wallis and Stan Wyatt) at Aylesbury Town Hall until it burnt down in March, and at the Walton Hall.

At the Grosvenor, there was a wider range of artists presented.

In March Tony Orlando appeared as part of a tour with Jimmy Crawford and the Ravens.

Tony Orlando had hits in 1961 with Bless You and Halfway to Paradise. Orlando was later involved with Tony Orlando & Dawn, as well as being a producer. 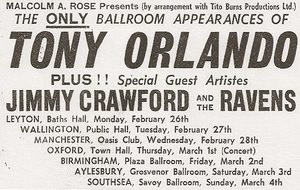 Others appearing included Craig Douglas, Emile Ford (with both the New Checkmates and the Original Checkmates), Mike Sarne, Wee Willie Harris, Screaming Lord Sutch, Cliff Bennett and the Rebel Rousers, Johnny Kidd and the Pirates and the Barron Knights.

Emile Ford died on 11 April 2016 – see his obituary from The Guardian. 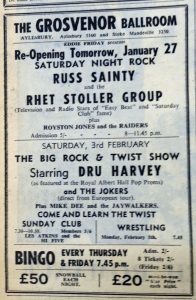 In May, Eddie Friday also tried a new midweek venture with DJ Eddie Moreno called “The Teen & Twenty Nite-Club” – a similar club was already successfully operating in Wembley with over 4,000 members, but in Aylesbury this was short-lived, closing after just a few weeks. 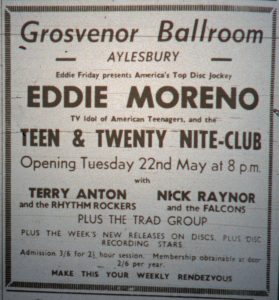 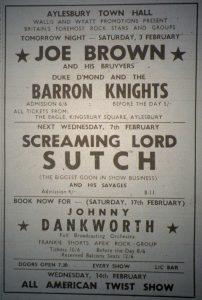 The Johnny Dankworth Orchestra was greatly enjoyed by Tony White, the jazz columnist in the Bucks Advertiser. Johnny Dankworth had enjoyed chart success with “African Waltz” in 1961 and had won the big band section of the Melody Maker jazz poll with almost 80% of the votes. Click image to enlarge. 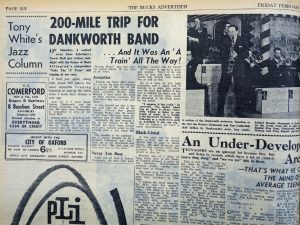 A disastrous fire at the Town Hall occured in March 1962. The Bucks Advertiser reported that it was the second fire within four days and thought to be the work of an arsonist. Painted solgans were found reading “If not this time there’ll be another” and “More to come”. Click image to enlarge. 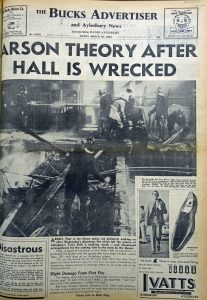 Following the fire, some shows were put on at Walton Hall – which had hosted the odd gig up until then, and would again provide a useful alternative whilst the Grosvenor was re-furbished to become the Borough Assembly Hall in 1963. 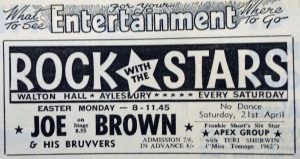 The ad below includes Gene Vincent among future bookings on 28th April. However, John Braley, a local authority on Gene Vincent, has been unable to find any evidence that this happened. The gig continues to be listed on various websites as part of Gene’s appearances in April and May 1962, part of his seventh UK tour on which he was backed by Sounds Incorporated, with the Aylesbury date sandwiched between Broadstairs on 27th and East Ham Granada on the 29th. If anyone has more details about this, please let us know! 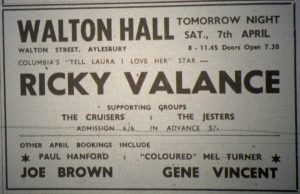 Below are lists of gigs at the Grosvenor Ballroom, the Town Hall and Walton Hall. Scroll down to view.