1969 was a year of transition for music in Aylesbury.

After the difficulties experienced by promoters in 1968, things looked bleak at the beginning of 1969. In the first half of the year, there were no regular gigs at the Borough Assembly Hall, the town’s main venue.

For rock music fans, the start of Friars club on 2nd June 1969 was a very significant moment, with regular gigs held at the New Friarage Hall in Walton Street on Monday evenings. 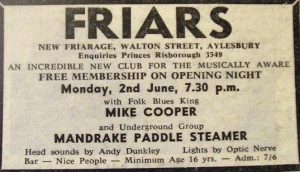 There were also two Friars gigs at the Borough Assembly Hall (or the Friars Auditorium, as it was dubbed for these shows). The first of these was with Fat Mattress and East of Eden, as reported below (click on image to open): 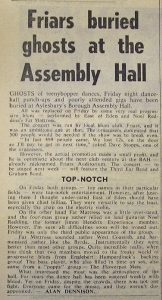 Full details of all Friars gigs can be found on the excellent Friars Aylesbury website, so we will not duplicate the details here.

At the Derby Arms, the Thumbstrumb Club, run by Mike Batory and Willy Barrett, continued on Friday evenings, presenting folk and blues, and moving to more established artists.

There were also a series of somewhat whimsical ads in the Bucks Herald, such as the one below: 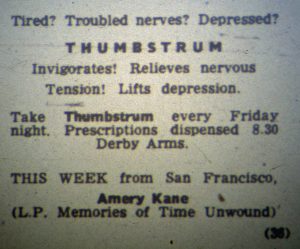 List of Thumbstrumb ggs that have been identified – there are probably more!

Gigs also continued on Saturday nights at the Aylesbury Social Club. There were also a few gigs at Rivets Social Club – details are sketchy, and any more information on the Social Club or Rivetts would be very welcome please. 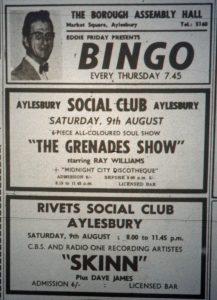 Please see here for a list of the Aylesbury Social Club gigs:

It is also worth recording that Mott The Hoople played at the Aylesbury Grammar School Christmas dance on 17th December.