The Ready Steady Go Club, which had started in Aylesbury at the end of 1965, presented more gigs at the Borough Assembly Hall before closing in the spring of 1966. On 4 January Them appeared:

However, the club had trouble with artists failing to turn up or equipment not arriving, and small crowds.

On 25th January, the Mark Leeman Five were due to appear – but only three of them appeared. The Bucks Advertiser reported:

Last week a much reduced Mark Leeman Five – without a vocalist and organist – gave us a makeshift show of, mainly, instrumentals. Although, admittedly, it may not be the club’s fault, this is the second time recently that things have gone wrong with group bookings.

Worse was to come when Inez and Charlie Foxx were due to play on 8th February. They arrived – but their backing group did not. John Finn reported in the Bucks Advertiser:

The famous American brother and sister singing team did arrive but a backing group did not. For two hours they sat in their dressing room twiddling their thumbs waiting for the group that was supposed to have left London at six o’clock …

Eventually Inez and Charlie agreed to appear and sang over one of their records. Teenagers rushed to the front of the hall and with just one number the Foxx’s rhythm and music swept over the small crowd. Resounding cheers followed their one and only number after which anger flared up again. 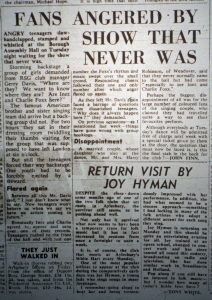 A few weeks later, on 22nd February, Tony Rivers and the Castaways were due to play – but the same thing happened. The Bucks Advertiser commented:

Another chapter in the trouble-plagued history of Aylesbury’s RSG was written on Tuesday night.

Three times now, in almost as many weeks, things have turned sour with artistes. On Tuesday the twist, treated by teenagers as a poor joke that is quickly wearing thin, was with Tony Rivers and the Castaways. They turned up, but their equipment didn’t. Again, no show.

Things got no better when another club, the Top Of The Pops Club, opened. The intention was to present top DJs, with some live bands. Pete Murray appeared with The Mindbenders. 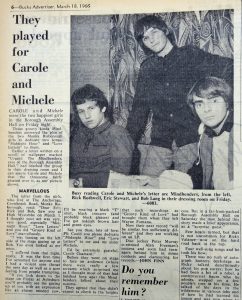 There were soon allegations of payments not being made – under a front page heading of Top Of Pops Club Flops, the Bucks Herald reported on March 18th that:

Agents for two of the country’s top disc jockeys alleged this week that they had been unable to get payment from the Top of the Pops Dance Club, based in the Borough Assembly Hall, Aylesbury. They maintain that Alan Freeman and Peter Murray – famous faces on television and well-known on radio – have received no money for their personal appearances.

And club members who intended going to the club tonight to see The Small Faces, last week No. 1 in the hit parade, will be disappointed. Their agent has told The Bucks Herald that the group, contrary to an announcement made from the Assembly Hall stage last week, have never been booked to appear at Aylesbury.

Meanwhile, Eddie Friday continued with his Saturday evenings, distancing himself from the problems with other promoters. Among artists appearing for Eddie on Saturdays were Billy J. Kramer and the Dakotas, The Honeycombs, Patti LaBelle and her Bluebelles, Brian Poole and the Tremeloes and The Ink Spots.

The Ink Spots was a strange booking. Tony White in his review in the Bucks Advertiser wrote:

It must have been very difficult – and nerve-wracking – for the Ink-Spots to face a crowd of beat-crazy teenagers at Saturday night’s Eddie Friday promotion at the Borough Assembly Hall, Aylesbury.

At least that was the impression I got from the wings as I watched this veteran group of American showbusiness at work. They looked nervous in front of the youngsters, most of whom had probably never heard of them. That the Ink-Spots’ music was so many years pre-beat was very obvious…

This is the first visit to Britain by the Ink-Spots since 1952. Billy Bowen told me after the show that American bases around the country are included in their itinery. I’m sure they will be far more appreciated there than in the current British ballroom scene.

On 18th October, the El Bribon Organisation put on Lee Dorsey, who had a hit with “Working In A Coal Mine”.

Note: There is some confusion as the local papers also carried ads for Geno Washington and the Ram Jam Band on the same evening!

Towards the end of the year there were more problems with artists advertised but not appearing. On 22nd November, the El Bribon Organisation advertised Tom Jones – billed as “The Greatest Rave Night in Aylesbury”. However Tom Jones did not appear. Dave James later reported:

Last November, posters all over the town proclaimed a show and a dance would star Tom Jones. Tickets were even available from local shops. Tom Jones did not appear, which was not surprising – he was not booked to appear and did not even know his name was on the posters.

Crowds of youngsters turned up on the appointed day, to read a notice saying there would be no show and no dance. 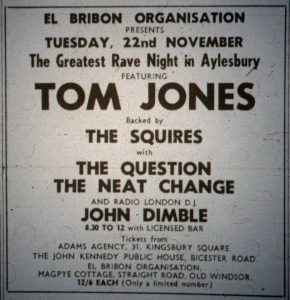 1966 also saw the first Hobble on the Cobbles in the Market Square – see here for more.

List of gigs at the Borough Assembly Hall in 1966: