1964 brought changes on Tuesday evening with Aylesbury Bluesville presenting rhythm and blues in the shape of acts such as The Animals, The Yardbirds and Manfred Mann – see here for details.

Saturday evenings at the Borough Assembly Hall continued to be promoted by Eddie Friday. Highlights included two further appearances by Gene Vincent (February – see below – and July) and three more by the Barron Knights (July, October and December). 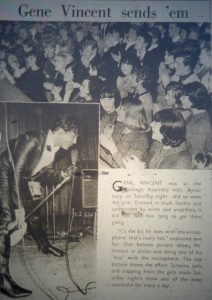 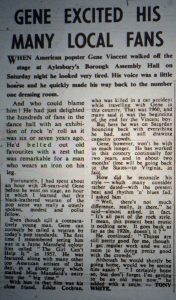 Appearing for the first time during the year were the Swinging Blue Jeans (two appearances in February and November), Unit Four Plus Two (in May and September) and The Applejacks. With the winding up of the Aylesbury Jazz Club, Eddie Friday also too k the opportunity to present some jazz artists, such as the Terry Lightfoot Jazzmen and the Dutch College Swing Band.

It was the biggest night at the B.A.H. for many seasons, of that there was little doubt. Promoter Eddie Friday shut the doors tight at 8 o’clock, just as the dancing started. Inside were as many people as he dare alow. The fans had waited for a long time – two girls started their vigil four hours earlier. 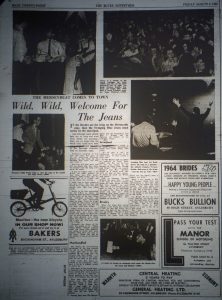 One unsolved mystery is a possible appearance by Marianne Faithfull. In her book Faithfull: An Autobiography it shows that, as part of her schedule for November 1964, Marianne Faithfull appeared at the “Barrow Assembly Hall” in Aylesbury on 23rd November 1964 – but this was a Monday night when wrestling was taking place at the hall. No other details can be found about this – can you help?