The Aylesbury Jazz Club started 1963 at Aylesbury Social Club but, after a summer break, moved back to Market Square and the Borough Assembly Hall (being the refurbished Grosvenor Ballroom).

The Bucks Advertiser of 22 February reported on one unexpected jam session. Under the headline “A Session To Remember At Social Club”, Tony White wrote:

At Aylesbury Jazz Club on Tuesday … The Ken Stewart Seven was the advertised band. But for some reason or other Dick Charlesworth thought he was playing there. So, along with his wife, singer Jackie Lynn, only to find that the rest of his band was in London, fully aware of the night off.

Despite having driven from Southport after being on the road for 18 days … Dick and Jackie decided to stay and have a blow. And what a session it was … His clarinet playing was some of the best I’ve heard at the club and he proved to be no mean performer on the alto sax. The presence of Dick and Gerry Turnham with Jackie singing seemed to spur on the Ken Stewart boys. They blew well.

Later, on 14 June, Tony White was expressing concern at falling attendances at the Aylesbury Social Club. Under the heading “The Missing Fans – Where Are They All Now?”, he wrote:

Attendances at Aylesbury Jazz Club have been dropping sharply in the past few months. It’s no secret but a well-known fact that an average of only 70 to 90 fans turn up each week at the Social Club in Park-street.

Former regular attenders have said to me: “But the club is not getting the top bands anymore.” Surely this is a vicious circle. If the crowds are not coming any more then the promoters cannot afford the more expensive groups. It stands to reason.

Ron Lesley is hoping things will pick up when the club moves back to The Grosvenor. But if we’re not careful he will be shutting the doors at The Social Club before then.

The last date for Aylesbury Jazz Club at the Social Club was on 9th July. The Borough Assembly Hall was expected to open in late September – and September 24th was pencilled in for the re-opening of the Jazz Club there with Acker Bilk contracted to play. As it was, the opening was delayed, and the first night for the Jazz Club was on 22nd October with Chris Barber – though his wife, Ottilie Patterson, was ill and could not appear as advertised.

The move to the Borough Assembly Hall also saw the return of Acker Bilk, Ken Colyer and Kenny Ball. 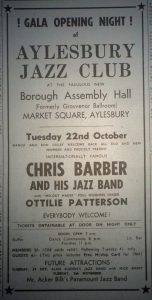