1963 saw the closure of the Grosvenor Ballroom for refurbishment, re-opening as the council-owned Borough Assembly Hall. During its closure, the Walton Hall stood in, with weekly rock concerts.

The Grosvenor Ballroom closed at the end of April 1963, initially for three months – but the date of the re-opening was put back a number of times, and eventually to October 7th.

During the first months of the year, Eddie Friday continued to promote rock gigs at the Grosvenor on Saturday evenings. Among the artists appearing were Emilre Ford and the Checkmates, Eden Kane, The John Barry Seven, Eric Delaney and his Band and the Vernon Girls.

Tony White in the Bucks Advertiser was particularly impressed with Eric Delaney and his Band. Eric Delaney was a drummer and bandleader, and Herbie Goins was the vocalist. Click on image to enlarge: 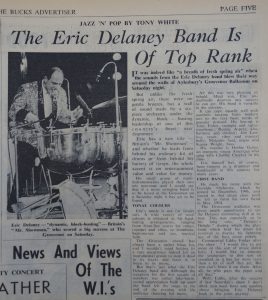 The closure of the Grosvenor caused some concern – the Editor at the Bucks Advertiser received a letter on behalf of “A Group of Aylesbury Teenagers” – see below. It was announced that Alan Wallis and Stan Wyatt, who had promoted gigs at the Town Hall before the fire in March 1962, had booked the Walton Hall for 19 weeks, to start when the Grosvenor closed. The first night at the Walton Hall was on 11th May – and the run eventually extended to 21 weeks, ending on 28th September. Click on image to enlarge. 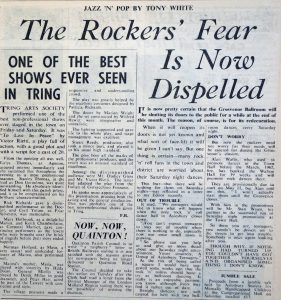 In September it was announced that the new name for the Grosvenor would be the Borough Assembly Hall – not popular with many, including Tony White in the Bucks Advertiser:

The Borough Assembly Hall. Look at it. Read it. Let it roll around your tongues for a while. You will probably agree with me. It sounds horrible! Believe it or not, this is the name Aylesbury Borough Council – new owners of the Grosvenor – have decided to call that popular centre of entertainment in the corner of the Market Square …

For goodness sake, why not leave it as it was. The Grosvenor is well-known over a large area either through the jazz club or the Saturday night dances that used to be held there until it closed. “The Grosvenor” is short. “The Grosvenor” is an appropriate name for a building that is to be the venue for the type of entertainment to be offered there.

And I say this. I’ll bet my whole collection of long-playing records that “The Grosvenor” is how it will continue to be known, no matter what the new owners like to call it.

The Bucks Advertiser also published a useful potted history of the venue (click to enlarge): 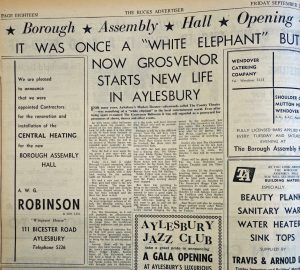 The grand re-opening took place on 7th October, with a charity ball in aid of the Mayor’s Freedom From Hunger campaign, with Joe Loss and his Orchestra and Johnny Thunder and the Thunderbirds.

One of the singers with Joe Loss was Ross MacManus (who also played trumpet); Ross is the father of Elvis Costello (Declan MacManus). He also composed and sang the 1970s “I’m A Secret Lemonade Drinker” TV ad for R. White’s lemonade. 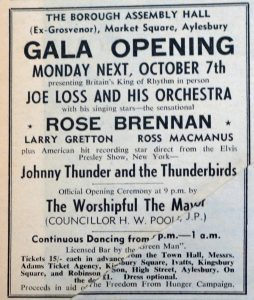 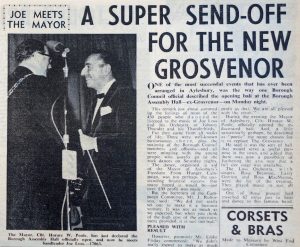 Also of note is that during the year Ian “Sammy” Samwell presented record nights in Aylesbury on Wednesdays – initially at the Grosvenor Ballroom and then, after its closure, at the Walton Hall – see report below.

Ian Samwell was a member of Cliff Richard and the Drifters and he wrote “Move It”. He was later a record producer for artists such as Sounds Incorporated, Georgie Fame,John Mayall and The Small Faces. Later he was in-house producer for Warner Brothers in London, bringing artists such as Linda Lewis and America to the label, producing the first America album and the hit “A Horse With No Name”. 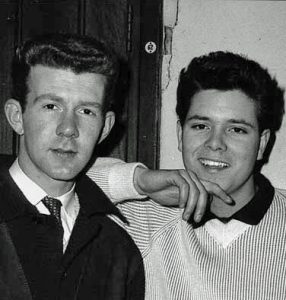 Pete Frame writes about Ian Samwell in the Epilogue to his book The Restless Generation. Ian had moved to Sacramento, California.

Sometime in late 1991, suddenly and unexpectedly overcome by breathlessness, he had collapsed and woken in hospital, where he was diagnosed with idiopathic cardiomyopathy. If he didn’t have a heart transplant, he would die, doctors told him – which was a bit of a bummer because he had allowed his medical insurance to lapse only six weeks earlier and the procedure was going to cost in excess of a quarter of a million dollars …

“There was no way I was going to get that sort of bread together,” said Samwell, “so I accepted I was going to die … I phoned a few friends, including Robert Allen, my lawyer in London, to ask him to bring my will up to date, and then fell into a deep sleep.”

When he came to, a hovering nurse came over. “Who are you?” she asked. “Samwell, Ian Samwell”, he replied, nodding toward the case notes at the end of the bed. “Yes, I know that,” she said, but who are you? The phone hasn’t stopped ringing. All these people have been calling with offers of money – Pink Floyd, Cliff Richard, Led Zeppelin … who are you?”

As soon as he had put the phone down, Robert Allen had got on to Jeff Dexter, the DJ / producer / manager who was Ian’s principal sidekick throughout the sixties and seventies, and Dexter phoned everyone he knew … Sufficient funds were gathered for an operation to replace his heart … and it pumped efficiently for another 11 years.

Ian Samwell eventually died on 13 March 2003, aged 66. Nicest guy you could ever meet. And he wrote Move It.